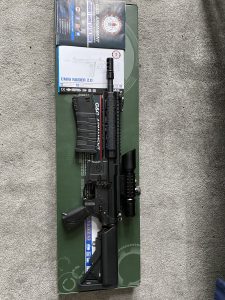 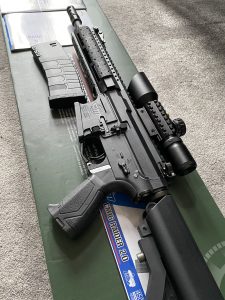 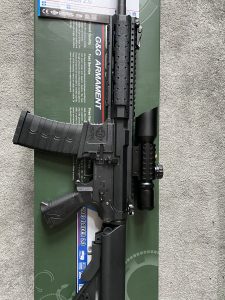 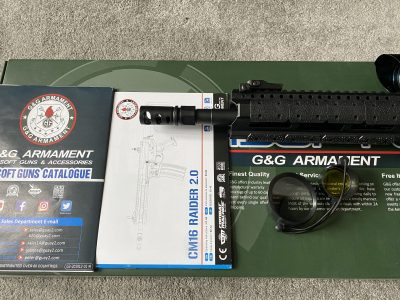 The rifle is constructed from a mix of High Strength Polymers, Aluminum and Metal, with an Alloy Outer Barrel, Flash Hider, Flip-Up Ironsights, Charging Handle, Buffer Tube and Sling Plate, and a Polymer Hand guard, Pistol Grip, Receiver and Stock.

What really makes this rifle stand out from the crowd is the M-LOK Hand guard, which comes fitted as standard, which is one of the latest types of Accessory attachment type to come to market, and is typically usually only seen in high-end weapon builds. The Rifle features a full length top 20mm RIS / RAS Rail System, measuring in at an impressive 14”, which allows the attachment of complex Sight and Scope Setups such as Magnifiers and Holographics as well as the attachment of Lasers and PEQ boxes.

The gun features a range of Ambidextrous features which not only make the gun great for using for left and right handed users, but also allows you to properly transition shoulders in tight CQB conditions. The gun features an Ambidextrous magazine release which allows the user to change Magazines even if they are shooting in their off hand / transitioned position.

The weapon comes with Removable Flip-Up Ironsights, which lock in place, and can be removed when a large sight is added. The front of the rifle features a removable flash hider, which can be replaced with any 14mm Counter Clockwise (CCW) Suppressor or Tracer unit for extra levels of customization.

The rifle features an Adjustable Hop Up unit, which can be accessed by pulling back the charging handle, and is designed to add Spin to the BB to increase range and accuracy, and can be adjusted for a range of BB weights. The hop-up works by applying backspin to the BB before it travels down the barrel to add range and accuracy due to the extra stability of the BB as it flies through the air.

Internally, the gearbox is rear wired, with the battery stored in the stock, and comes with a G&G Warranty Sticker so you know the rifle has never been tampered with. The rifle’s electric powered gearbox is based on the Version 2 design, meaning it shares a wide range of aftermarket upgrades and replacement parts which you can use to improve or repair your gun, and features a fuse which is wired in line with the battery to protect the gun should any short circuits occur.

This rifle is perfect for those who were on the fence buying the original combat machine, and wanted something a little more fancy, or for those looking for the ultimate backup rifle, which could in time take over their main weapon.

Comes with scope in the pictures and upgraded mid cap 120 G&G mag. I have other accessories I can add at an extra cost. The rifle is brand new, bought in lockdown. Decided to upgrade to a different model. I have a Nuprol Large PNP hard case for the rifle too at an extra cost.