This is a guest review of the Airsoft Innovations Blast XL coming from one of our community members, Daniel ‘Flanksy’ Hutton. You can read more articles like this on  Flanks Airsoft

Over the past few years, the demand for Airsoft “Grenades”, especially reusable ones, has grown exponentially. The industry has been flooded with many companies bringing out their own versions of reusable pyro for both the casual skirmishes and more serious milsims.

While the likes of Dynatech have been around forever, they can be quite expensive to run as they use blank ammunition in various calibers, they are safe to use as long as you operate them with common sense and they most certainly get the job done.

However, not all of us want to use blanks and every so often a company brings out something new to the field, dare I say they Innovate and take a product in a different direction to either produce something more reliable and cheaper to run, or different a little gimmicky but fun.

The manufacturer Airsoft Innovations seems to have exploded onto the scene recently with the release of their Impact Grenade, the Cyclone and the more improved Blast XL. Today I’d like to give you my opinion and tests on the AI Burst XL grenade which is quickly becoming my go-to bang of choice

I’ll break down the review into sections to make things easier and as always will try to provide pictures where I can!

What’s in the Burst XL Box? 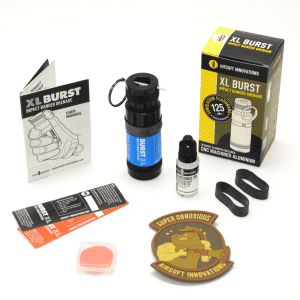 Inside the box as you can see, You receive the Grenade itself which comes with the blue skin attached, You get two spare skins in Orange and Black so you can differentiate between yours and other peoples Grenades, An Obnoxious Innovations Hook and Loop Morale patch which I think is quite a nice bonus and I do wear mine at games to promote and support a company I’m quite fond of, One pack of thirty burst discs, 2 Spare rubber bands to keep the fill valve safe and a small bottle of grenade oil.

As well as a handy manual which tells you how to operate and maintain your newest purchase!

The Burst  XL Impact Grenade is honestly one of the most affordable grenades on the market. Retailing around £40-60 in all major retailers, with the resupply kits costing around £15.

How to Use the Burst XL:

The Burst XL is simple to operate, The bottom unscrews and you place one of the provided burst discs into the opening. The Burst discs are made from Cellophane paper and you can buy refill packs or make your own! This makes the grenade extremely cheap to operate, The way the Grenade works is quite reminiscent of the Thunder B grenades that were released a few years ago, though in operation they are much safer! And much more reliable.

To prime your grenade the first thing you need to do is unscrew the top cap of your grenade, Once unscrewed you need to push the firing pin up and to the side until it slots into the small groove then insert your pull pin through the holes to keep it in place.

The way you get the bang from the product is the pin hits a valve which releases the gas and causes it to expand against and rupture the burst disc, They are rated at 125db which is quite loud!

I found them to be extremely sensitive at the Gaol weekender I just attended meaning I could drop them from a distance of three feet or less onto the floor and still have them detonate which is extremely good when you are playing CQB and want to reliably take out groups of enemies!

Maintenance on the Burst XL is really simple! Keep them clean and once every two or three uses make sure to lubricate the shuttle as instructed in the manual to ensure smooth operation. This lubrication ensures the grenade has a proper seal for the gas!

In closing if you want something reliable, cheap to purchase and easy to maintain then I highly recommend picking up the Airsoft Innovation Burst XL.

Since writing this review I now have two of these and one of their Cyclone grenades because I rate their products so highly and will be keeping an eye out for their products in the future for certain. That said, I do believe their latest product (the 40 Mike) is receiving a quite controversial welcome by the community, A lot of site owners I have spoken to will not be allowing its use on their sites, But I do look forward to testing out the new 40 Mike for the giggles it’s sure to bring! 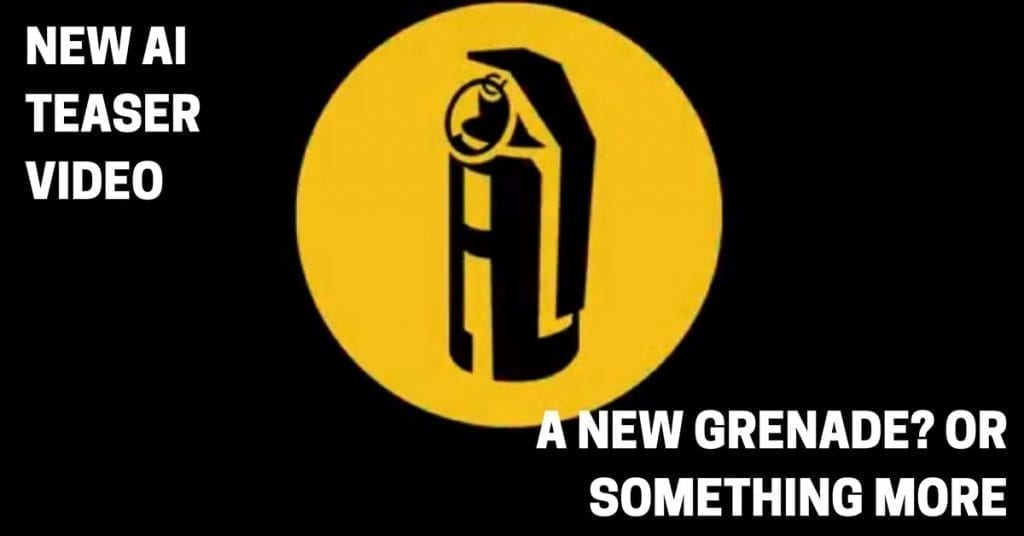 We’re not even through January but the guys at Airsoft Innovations have dropped two teaser videos for an upcoming product that’s launching in March. If… 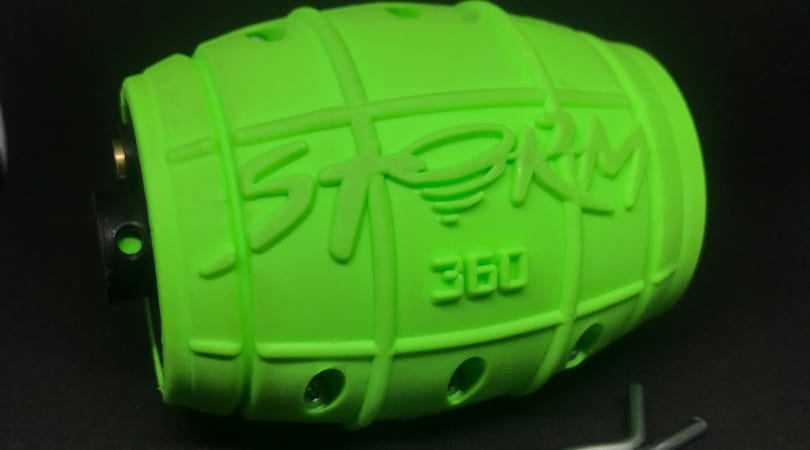 The Storm360 Grenade is a BB ejecting IMPACT grenade by Action Sports Games, and as it’s name suggests – it spins into a frenzy while launching 165 BBs in 360 degrees. For £50, it’s one of the most affordable reusable Airsoft Grenades.