One of the biggest issues at any event happens at the start of the day – The Chronograph.

We turn up, shoot through a box and get told whether our weapon of plastic destruction is clear to use. 95% of sites do this by checking an FPS chart. What they’re looking at here is how fast a BB is travelling per second.

In this article I’m going to explain why this is terrible for airsoft and why UK Airsoft Sites should switch over to measuring the muzzle energy (joules).

To support this argument I’m going to target 3 key areas, they are Safety, Fairness and The Law. By resolving these 3 points we will all have a better, safety airsoft experience.

Imagine someone runs up to you and throws a brick in your face, the brick hits you at 10mph. Ouch right? Now imagine the same situation but this time they’re throwing a bath-sponge at 10mph. Not quite the same effect even though it’s the same speed? 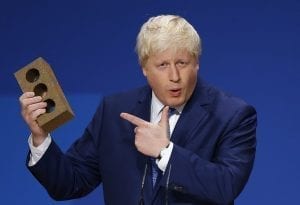 You see, the mass of the item is what makes it painful – which is where energy (measured in joules) matters.

Energy takes into account the Speed and Mass of the item, and puts it into a number that represents kinetic energy. In my example the brick would be hitting you at 35 Joules, but the bath sponge is only 1.5 Joules.

By measuring in joules, we take into account the weight of the BB and the power behind it. Making the game a lot safer and fairer – which moves onto my second point.

Joule Creep, you may of heard about it. I’m going to try keep this part really simple – but ultimately all you need to know is that it’s bad for airsoft skirmishes.

If I take my sniper rifle, fire through the chronograph with a 0.2g BB, I might get 2.3Joules which calculates to 498fps. Great, that’s perfect for playing a game with.

But, of course I won’t use a 0.2g BB on the field, I need heavier so I swap to 0.48g BBs. This should chrono around the 322fps mark, which is still 2.3Joules. The energy output should stay the same; however the speed of the BB will drop because it’s heavier.

However, with certain setups the BB actually gets a higher energy output than it should. This can happen very easily with Sniper Rifles, HPA and Gas Blow Back Rifles.

Using the details above, imagine having two rifles both set up to fire 500fps on 0.2g BB which we then switch to 0.48g. Theoretically they should both fire at 322fps however one of them suffers from joule creep and is actually firing at 385fps.

That’s a energy of 3.3 Joules. Putting that into perspective, it’s like having a sniper rifle firing at 600 fps on a 0.2g BB… 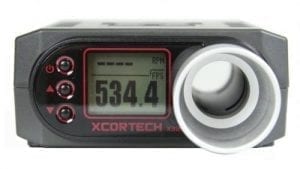 When you pull the trigger the BB is launched down the barrel by compressed air. By the time the BB leaves the barrel it begins to slow down and the excess air flows out the barrel.

Now, if BB has more weight, it can actually maintain speed through the barrel using the excess air behind it as an accelerator. This results in firing with a higher energy count than it should.

That’s Joule Creep in it’s most basic explanation, and the reason HPA/Gas rifles suffer more is because of the way air volume works in the cylinder.

Before we ban HPA outright, there is a really easy way to resolve this. All we need to do is chronograph players on the BB weight you intend to use in game and calculate this to the appropriate Joule Limit.

Note: If a player is going to cheat by claiming different weight BBs, they were going to use Joule Creep anyway. You could resolve this by chronoing on Site BBs.

I hope by this point you’re already convinced that using energy rather than speed is better – but if not what about considering the law’s position?

You see, our legal system measures the energy output of our Airsoft RIFs in terms of Joules. When the Home Office enforced the Police & Crime Act in May 2017 it was very clear that the Government want to see us self-regulating our energy outputs and thus keep airsoft outside of Firearms legislation.

For Automatic weapons (burst), that means we’re limited to 1.3 joules – Semi-Automatic (sniper rifles/dmr) has a maximum of 2.5 joules.

If you fire over that limit you’re either being classified as having a Section 5 Firearm (punishable by a 5 year prison sentence) or you have an Air Weapon, and shouldn’t be firing it at other people.

As a site owner or retailer; it’s their responsibility to ensure players are safe and I’d like to think education on power limits should be included on this. By forcing a player to measure on energy at each game day, they become more self aware.

How do I calculate Joule Output?

I could place the maths equation here and finish the article, but I feel that the only way to push for change is to make it simple.

That’s why I launched the FPS Calculator on Airsoft Nation. App users you can find it on the Mobile Side Menu. 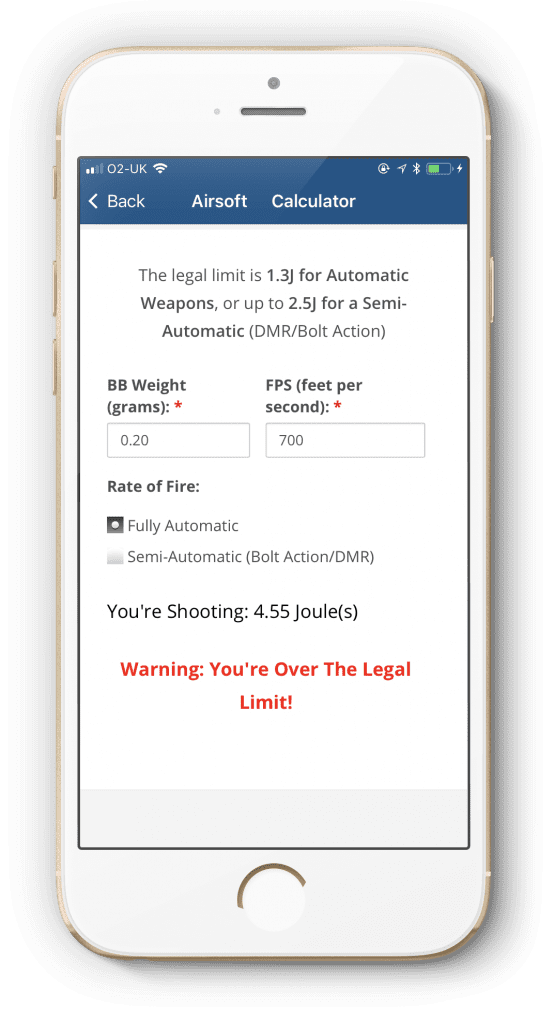 This tool makes it simple. Enter your FPS and BB mass and it will automatically calculate your Joule Output.

To summarise, I hope that this article has helped clear up why we should be asking sites to review their current stance on FPS measurements. Keep an eye out for later this year as Airsoft Nation pushes for this change across the UK Airsoft Industry. Until then though, please share this article to your site owners and friends.