Last weekend was the 5th annual TM Festival, where Tokyo Marui show off all their planned product releases due to drop over the next 12 months. This year’s reveal was awesome! 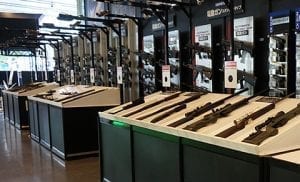 There are 2 major events for the airsoft industry where we see the majority of the upcoming airsoft products being revealed, these events are Shot Show (Last Vegas) and IWA (Germany).Both of these are closed events, only open to the media or traders. Tokyo Marui do not attend these events, but instead run the TM Festival, an event open to all players.

This was the 5th event they have put on, a weekend event where anyone (18+) can turn up for free, experience some airsoft shooting and watch the new product line announcements. This year they had over 30 airsoft RIFs on display, a shooting range to experience the Next-Generation Recoil Systems and also special guest appearances. 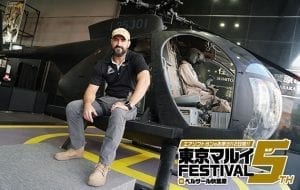 Weapons trainer Anson Beck (known as Hollywood) appeared on the stage of the new product section for the MTR 16 demonstration, explaining how to handle and manipulate the weapon, transitioning hands and showing off tactical reloads.
So, with the event out the way – let’s look at the new 5 major releases releases.

This is has been the most talked about product from the event, and I’m sure some of you won’t read any further than this – the TM MK46 Mod.0

This is the MK46 SAW (Squad Automatic Weapon), the smaller, more mobile version of the M249 LMG (Light Machine Gun).

Starting from the front, we have a Flash Hider which is 14mm counter clockwise, this means suppressors can be accepted. Moving down to a fixed front sight which is adjustable for windage. 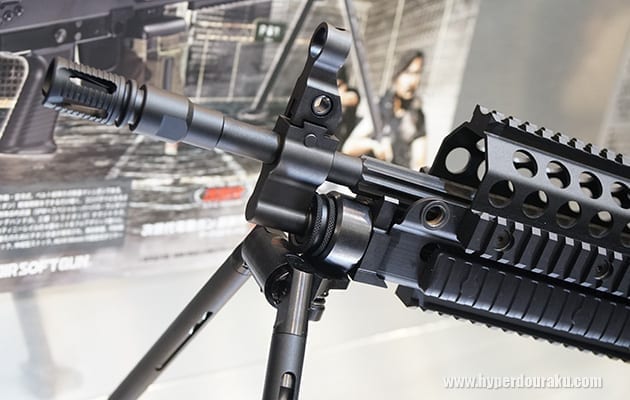 Next up is the barrel assembly, this is managed by a quick release system just like the real thing. Push up on the release and the outer barrel (front end) simply pulls off. This will be necessary as the battery goes into the front guard.

The front guard is covered with 20mm picatinny on all sides and underneath is a detachable, foldable bipod. First impressions on this is that the bipod looks pretty stable. 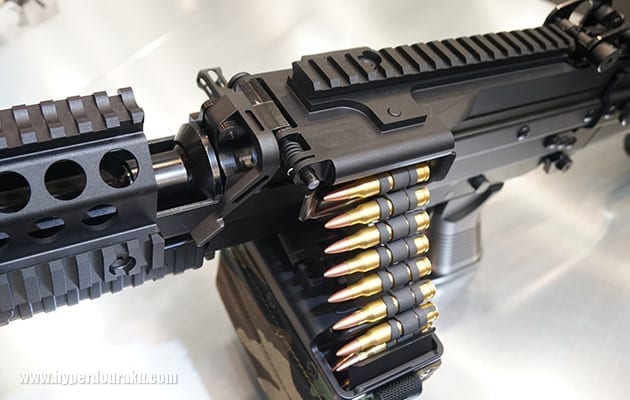 Now we’re at the main body, and this is the talking point. The MK46 Mod.0 is a Next-Generation Electric Gun, this means it comes with a Shot & Recoil Engine!

Every time you pull the trigger you’ll feel the kick each shot, in addition to that the fake ammunition belt shakes with vibrations to simulate the feeding of the belt.

Talking about the magazine, it holds 1000 rounds and is powered by 4xAAA batteries. Changing the magazine requires you to lift the top receiver, remove the belt and slide the magazine off it’s guide-rails. Simple, elegant and realistic enough to know there will be a little bit of down-time if you were to run out of ammunition while suppressing the enemy.

While the feed cover is up, magazine is empty or the barrel is disengaged the gun will not fire, and upon replacing the MK46 with a new magazine you will be required to cock the charging handle. I’m telling you now, you’re going to feel like a badass!

Finally to the rear of the TM MK46 Mod.0, you have the adjustable rear sights and fixed stock. Since the stock is empty, I’m hoping there is a possibility of changing this to a metal sliding stock.

Let’s be fair though, this AEG weighs in at 6.6g – it’s going to be a heavy beast to carry around. Maybe a metal stock is not advisable!

No exact release date but it’s rumoured to be available by the end of Spring. The price has also not been announced but I wouldn’t be surprised to see this on the higher end, somewhere around the £700 mark. 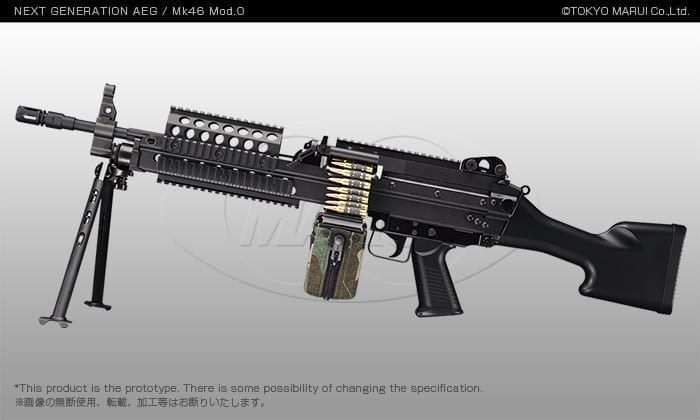 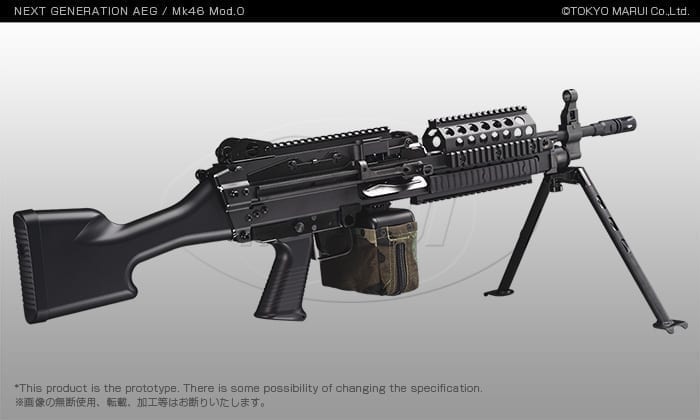 Moving onto the second release of the weekend

I love the AK, and the folding stock variation was my first ever airsoft RIF, so this one is close to my heart.

TM have always had a version of the AK since the early days and earlier this year we saw the AK47 Type 3 released, which is their Next Generation of Electric Guns. 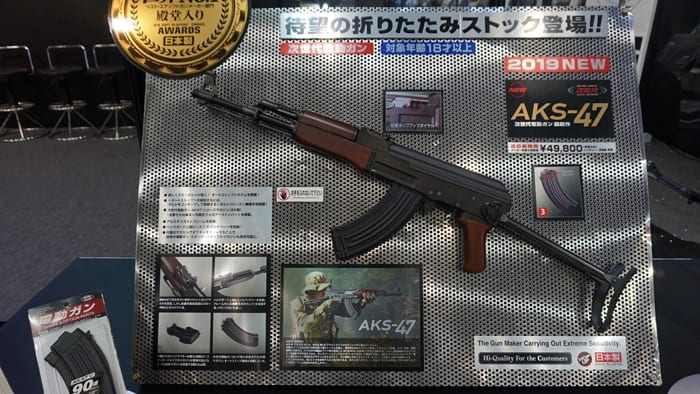 The Tokyo Marui Next Generation Series is their series of automatic electric guns (AEGs) that have a simulated blow-back and bolt stop. This means when a magazine is empty, the bolt is locked forward until a fresh magazine is inserted and the charging handle pulled back.

Finally, we have a folding stock version, as opposed to full stock. The battery was always in the front compartment so there aren’t any mechanical changes. 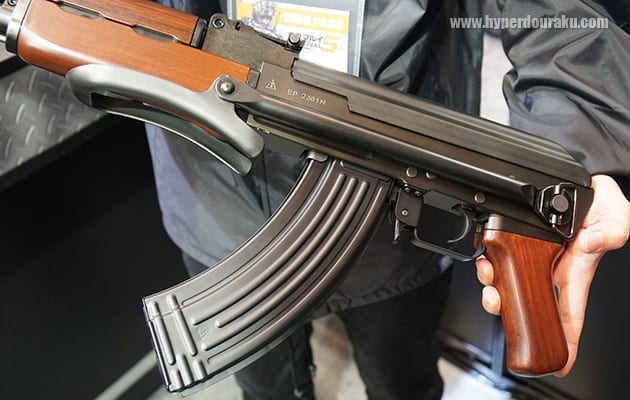 My only concern with this model, is the same problem that happens with all folding stock AKs – the folding stock pin. It’s known to be the weak spot and having personally gone through 3 of them on my CYMA, I’d be worried the screw gives up.

However, TM have addressed this by reinforcing the stock and removed the screw. 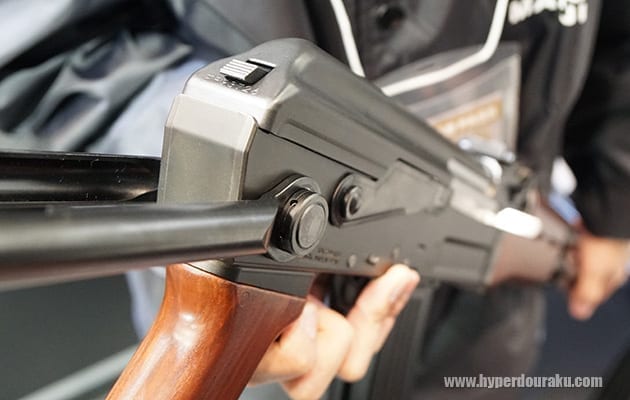 Estimated release is planned for February 2019. In terms of pricing, we can take an educated guess that it won’t be too far from the Type-3 AK47 so expect £400-450 price tag. 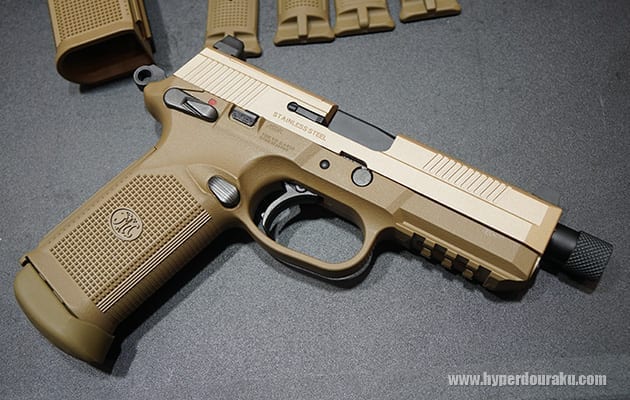 Fully licensed by FN Herstal and build on a 1:1 scale, the FNX-45 Tactical is a gas blowback pistol and it’s available in dark earth (FDE).

This pistol is entirely ambidextrous, so that includes the magazine catch, slide stop and safety lever. Perfect for players like me, who are left handed.

Talking about the safety lever, it has two operations. Slide it up to enable Safe, slide it down to de-cock the pistol. This means you can make the pistol safe even after it’s cocked. 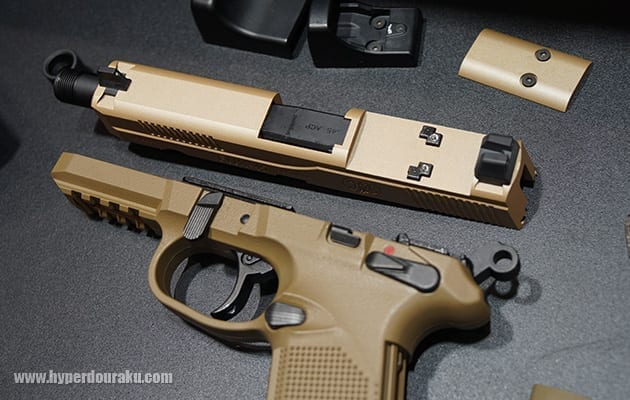 On the end of the FNX-45 is the 16M screw for a suppressor, underneath is a 20mm picatinny rail for adding a torch accessory.

The final feature, and something of a theme of note – on top is a optic mounting point. This enables usage of the new TM Micro Pro Sight without removing the rear sight posts. 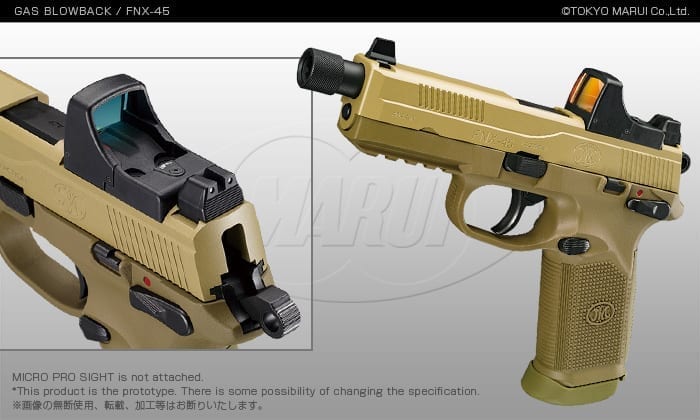 I know there are a lot of players looking forward to the release of the TM FNX-45 Tactical pistol, you will be pleased to hear it should be released early February with a price point of around £145.

However, as mentioned in the FNX-45 Overview, it’s the year of the optics – and that’s what D.O.R stands for, Direct. Optics. Ready.

So yes, this will now accept the TM Micro Pro Sight, however it will require the rear sight removed. 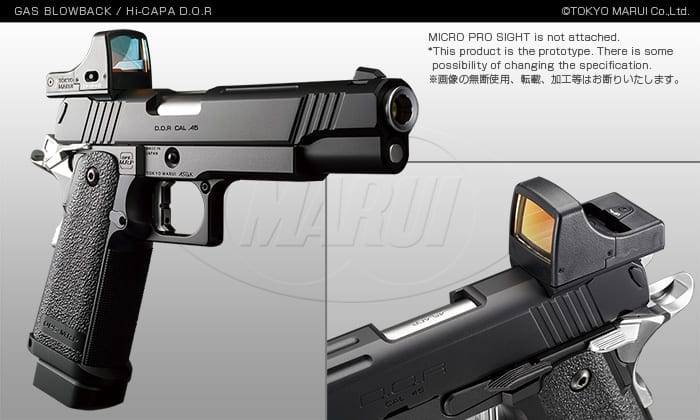 Due to the fact they expect players to use optics, they’ve put the cuts on the rear of the top slide to easily operating racking the slide even with a sight attached.

Beyond that, some internal upgrades and a fresh look – it is another Hi-Capa 5.1 without a lot more for me to say. 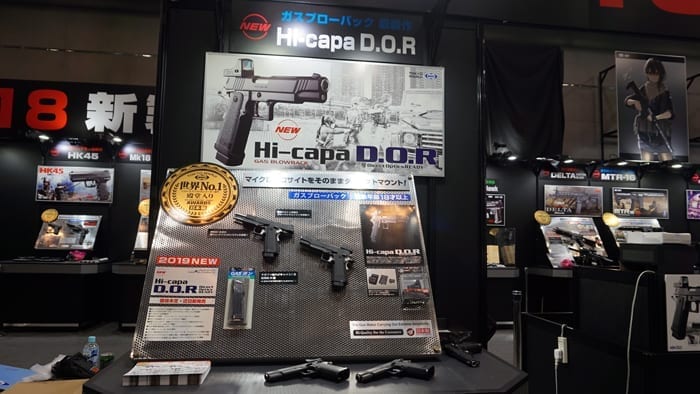 The TM Hi-Capa D.O.R will probably be priced at the £140 mark and we’re expecting it to be be released in March 2019.

This one is the last of the 5 new releases that have been announced at the TM Festival and I’m sure it’s going to be a little bit hit of miss. The V10 Ultra Compact is a shorter version of the Springfield 1911.

This isn’t the first time we’ve seen the V10 though as AW Customs released the Black version earlier this year. 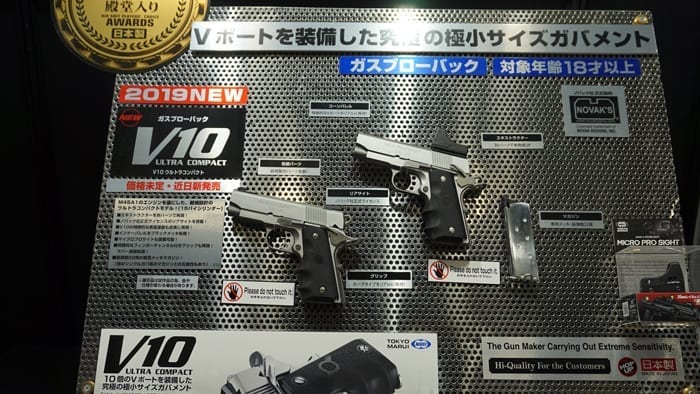 Available in Chrome, the V-10 Ultra Compact is a very short barrelled pistol with a smaller grip for easy concealment or smaller hands. It has 22 shots in the magazine and is also available to fit with the TM Micro Pro Sight (I told you, it’s the year of the optics!)

Visually it’s got 10 fantastic looking port holes and comes with a licensed NOVAK sight, so if you don’t want the optic you’ll be fine. 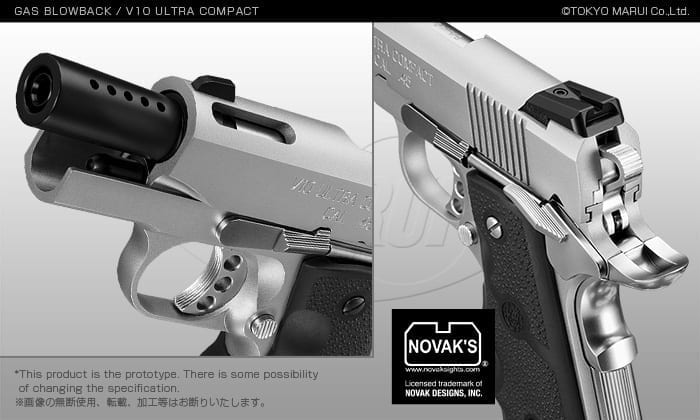 The TM V10 Ultra Compact is expected to be released by April, price yet to be determined but I’d imagine it’s going to be around the £120 point.

Well that’s the main releases announced by Tokyo Marui at the TM Festival 5.

If you want more information or to hear my thoughts in further detail, check out the Airsoft Nation Podcast, video is muted until 2:30

? Have you seen the latest reveals from Tokyo Marui?Today I'm flying solo on the Podcast as we run through the product lineup from the TM Festival 5 over the weekend! The New 5 releases all aimed before April, I'm super excited for one of them specifically…can you guess which? 🙂 ?Subscribe → Type “HIT” in the commentsIt's @Airsoft Nation Podcast, Hosted by @Graham Hoffman Monday at 8pm BST ✅ The show is bought to you by Airsoft Nation: The Airsoft Social Network. Download the App today via your preferred App Store. Or visit AirsoftNation.co.ukImage Credits: Popular Airsoft, Tokyo Marui, Hyperdouraku and Impulse101